Open for carry-out only. 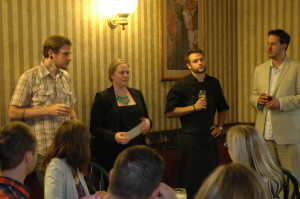 n a land of people who love beer, we’re not that unique. We love beer. And food. And fun. What makes us unique is that we want to make beer different. Not in a production of beer sense, but different in the way that you enjoy craft beer. We want to make intentionally esoteric beers that knock your socks off every time. Things you can’t get anywhere else. Maybe not even from us again.

We are going to change how you think of seasonality and local source as it relates to beer. It’s our passion, and we believe that it’s important to share our gems with you.

So, who the heck are we? A motley crew, that’s for sure.

Grant is our brewer. He’s pretty much what you’d expect: hipster-esque in his clothing and hair, a bit quiet, the brooding genius. He makes damn fine beer, and we should know, we’ve had plenty. His inspirations come from all over, and he’ll tell you his top three breweries if you ask. They’re good models to be inspired by- they’re doing what we’re doing, sort of. His favorite things to brew are the darker styles, like stouts and porters, but he’s spectacular at fruit/vegetable based saisons and IPA’s. This guy will change how you look at beer drinking. For him, it’s consumable art.

Jeff and Melissa are the business half, with more of a focus on operations and strategy than anything. They drink and eat plenty, but in those meager little minds plans of world domination are percolating. Jeff is actually a wine dude converted to beer dude who worked at a big resort in town and left to do his own thing. He’s still fighting the man. Melissa likes to help provide creative direction, and is constantly seeing dollar bill signs as planning takes place. She does a good job of fighting the men, and keeping the budget in check.

Last but not least is Christopher Dally.  He’s the everyman of our operation.  Labeling bottles, doing sales, helping Grant when he needs it, and soothing fussy babies.  There is simply nothing that this man cannot do.  Chris is also a converted wine dude.  He worked at some pretty high falutin places as well.  We are glad he’s part of the team, as he’s normally the voice of reason or the guy with a dirty joke, both of which we need.  We’ve got big plans for Chris moving forward, and you can expect to see him in many more roles as we grow.

We’re the people who are going to change the world for you.